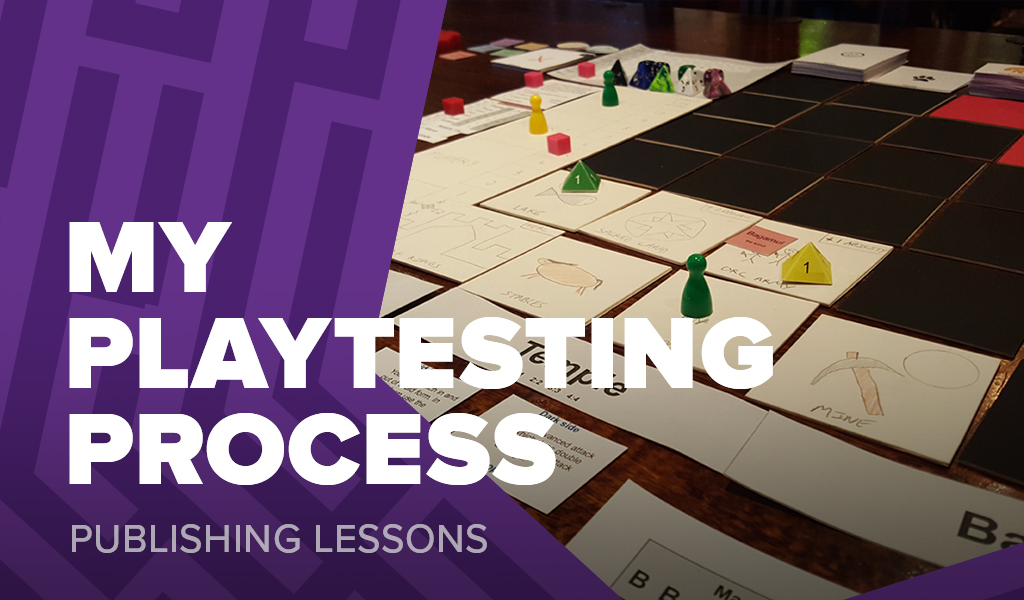 7 years ago, I was sitting in a room waiting for 3 people to turn up and play my brand-new board game. It was the first time I had ever playtested a physical game with people not involved in its development and I had no idea what to expect.

You can read the original report on the 4+ hour playtest here, but these days my approach to playtesting is entirely different and I’d never let a first test run for that long!

I typically work through 6 stages of playtesting and with each stage I’m looking at different things.

I start playtesting within a week of putting pen to paper, as soon as I have a prototype I organise plays with whoever is available from a small group of 5-10 people who live locally. At this stage the game is rarely a full game but does contain core concepts. I’m not looking for feedback from people but instead watching how they respond to mechanisms.

I’m trying to get a feel for the games flow, I want to know whether the concept that inspired the game is behaving how I expected it to, and I’m not afraid to change something mid-test and ask people to restart. Typically, I’ll be playing alongside the group during these playtests and everything is learned from my observations.

Once all the core mechanisms are in place, the general flow of the game is working, and I am happy it is providing the experience I am looking for, I move on to stage 2.

At this point I still stick to a small group of around 10-20 people, but I invite them to start playtesting while I watch. I’m observing the decisions they are making, interactions with each mechanism, thinking times, and emotional responses.

I’ll be happy to answer questions, although typically I start by asking “what do you expect the answer to be”.

This is when I start asking people general questions and collecting feedback. I don’t want to influence what they say so I keep the questions broad. My process has changed since, but here’s an example from 2016 of some questions and answers.

The goal of stages 1 and 2 is to get the game into a playable state, to refine the mechanisms and have a fairly good idea of what the final game is going to play like. Everything is done with very basic looking prototypes that contain no artwork.

Moving into stage 3 I refine the components, look and feel, and focus on moving from a rough prototype to a half decent looking game that reflects my vision for the end product. I open testing to a wider group of people and observe as many sessions as possible.

I believe 75% of what I take from playtests is learned from observations, I learn a considerable amount from how people hold things, touch things, move things, where they pause, what takes time to process, and the emotions they express. Most of these things don’t come from the verbal or written feedback they provide afterwards, although that does provide its own value.

By the end of stage 3 the game should be 90% finished, I wouldn’t expect any big mechanism changes, and I can start producing artwork.

My measurements at this point are really:

Assuming the answer to all 3 is yes, I move to stage 4.

This is where the more common form of playtesting comes in, I have a close to finished product where I may be tweaking numbers but don’t expect much to change. I start working with larger groups of players, move away from observing every playtest, and start reading feedback and reports.

I look for trends, balance issues, and address every concern that people raise, deciding if it is something I want to explore or if I am OK with how it is.

It is only at this point that I will start writing a rulebook.

With the game effectively finished, I now move into blind playtesting where I give copies of the game along with the rulebook to people who have not played the game before.

I’m testing whether the rulebook teaches them the game, but also if the game plays well when learned from a book and not taught by a person.

Now that the rulebook has been tested and I am happy that everything is complete, I have 1 final test I like to run.

I find a couple who do not play board games and sit with them for an afternoon while I watch them read the rulebook, set up the game, and play some turns. This is always a struggle as without any prior knowledge of board games, learning a game can be incredibly challenging. However, I find it very beneficial to see what areas completely stump them and what they can understand.

It’s a great way of catching any assumptions that gamers make, finding words which the wider population won’t be familiar with, and is just a good test to run.

I won’t always fix every issue they encounter as sometimes it’s just too complex for their experience level, but I do actively challenge myself with every problem they face and how I can make it go away.

In recent years digital playtesting has become a popular tool but it is one I choose to not use. I believe board games are more than just playing through a series of turns and that a truly great experience requires you to consider:

The list goes on, but to truly get the most out of a game it needs to be tested and built around the real-life experience.

I do think digital playtesting has a place once your game is finished and you are simply looking to playtest balance, but outside of that I’ve found considerable more benefits from physical testing.

Playtesting can be an emotional experience and I’d recommend my article on dealing with negativity.