One of the most common questions I get asked is how valuable is having a website, using Twitter, Facebook, having a newsletter, and do they bring in backers? To help answer this I have gone through my 4 game Kickstarters and sorted the stats into the useful groups shown below.

Before reading the stats it’s important to keep in mind the following information: 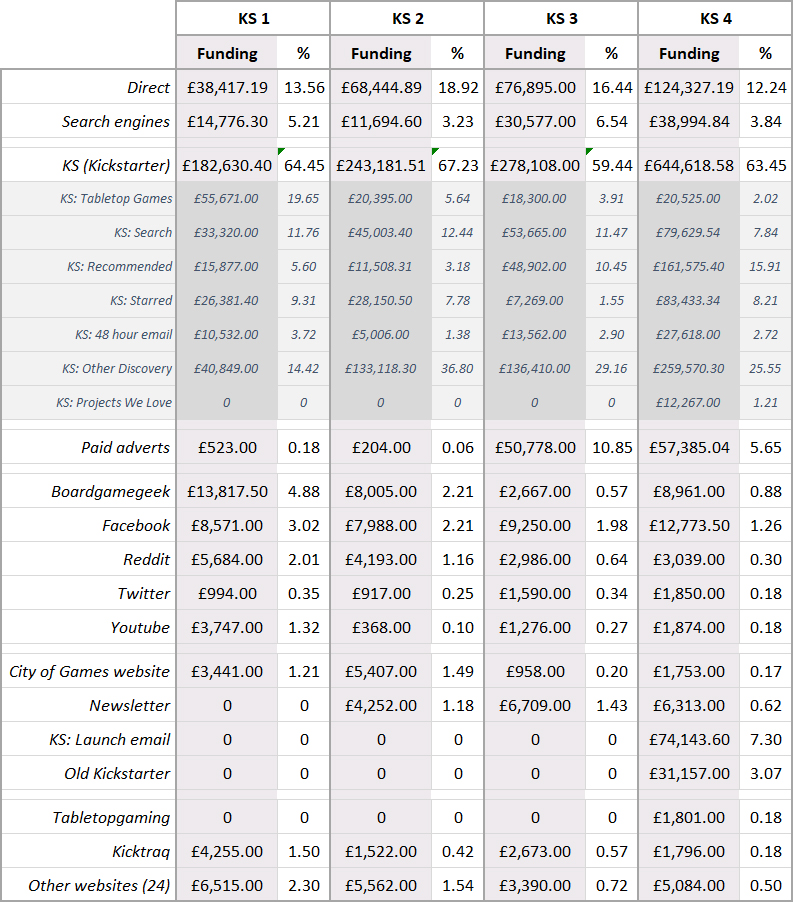 Direct represents anyone going straight to the Kickstarter page without coming from another trackable website. This typically means they would have already been familiar with the project in some way (perhaps they’ve seen an ad or heard from their friend) but there’s no additional details.

Even though there isn’t much we can take from this, it can be assumed some of our other efforts are being more effective than we can measure as this makes up about 15-20% of our funding and these backers had to hear about the project from somewhere.

I always say Kickstarter rewards those who are doing well as they want to drive traffic to projects which are gaining momentum. I typically see 60-65% of all my backers coming through Kickstarter itself which is a huge amount and really shows the power of the platform.

However, as this % is so high I have broken it down (the grey rows) into subgroups so we can analyse it a little more.

Search – People using the Kickstarter search, similar to the direct category above, perhaps a lot of this is people hearing about the project elsewhere and heading to Kickstarter to find it.

Starred – People who saved the project during the campaign.

48-hour email – Anyone who asked to be reminded when the project had 48 hours left.

Other discovery – Finding the project through other parts of Kickstarter.

Projects We Love – People who saw the campaign in the projects we love section.

It could be assumed that anyone using the Kickstarter search was already familiar with the project, and anyone who starred the campaign or is receiving a 48-hour email could have come from anywhere.

If you take these 3 groups (15-20%) away from Kickstarters contribution you are still left with at least 50% of all backers coming through Kickstarter and likely a little more.

Do keep in mind if you don’t bring any backers yourself, Kickstarter is less likely to give you any. A simple way of thinking about this is every time you bring 5 backers to the platform, Kickstarter might reward you with another 5 backers later. It’s up to you to make the first move!

When it comes to paid adverts I am not a fan, I believe in creating a community and taking a much more organic approach. I am not someone who focusses on selling more games but instead I like to inform more people about my games so they can make an informed decision.

As an example of this, I would prefer to say “A tile placing game where you rescue cats from an island” over “buy the highest rated cat game of all time today and get a free expansion”. While both techniques work (and the second will likely sell more games), I’d rather people want to buy my game for what it is, than buy it because they get free stuff.

Due to this way of thinking I didn’t really want to use adverts for my first 2 campaigns so I only experimented with about £2,500. I also didn’t track that money within Kickstarter so unfortunately I don’t have real values for how much it returned, my assumption is less than £5,000 across the 2 campaigns.

These adverts saw very strong returns but a big part of that is likely to do with me not over investing, many campaigns will spend much more money on advertising to grab every backer they can, while I still want to stay as organic as possible so I keep my advertising to a minimum.

There is a noticeable trend throughout the 4 campaigns with communities contributing 11.58%, 5.93%, 3.8%, and most recently 2.8% of backers. This isn’t due to there being less backers from communities but is a result of more backers coming from other places.

It shows just how valuable those communities are in the first campaigns!

Unfortunately, I didn’t have tracking for the newsletter on the first KS but you can see by the following campaigns it has generated some money but never a huge amount. I believe this is because I always do launch events at the start of my campaigns and my most active followers back directly through those. Meaning many of the newsletter recipients who would have clicked to back already have done so by the time they receive it. I always send Newsletters within 2 hours of projects launching.

The biggest piece to note here is the “KS: Launch email” which is sent to everyone who clicked the “notify on launch” button on the pre-launch page. This only existed for my most recent campaign but you can see it contributed to a large amount of backers, and most importantly these backers came early in the campaign. Again, I also feel this would have reduced the number of Newsletter conversions as many people subscribed to both.

Kicktraq always contributes a reasonable amount of backers and it’s worth keeping the project active there.

In KS 4 I noticed a decent amount of traffic from Tabletopgaming which isn’t something I would have expected.

Outside of that there were an average of 24 websites per project that contributed a reasonable chunk towards the campaign when combined.

Every creator is going to have a different break down and it will depend on where they focus their efforts and how they want to represent their brand. My paid advertising could be much higher (I only spent 2% of my total funding on advertising) and if I used more aggressive on-page marketing techniques my conversion rate would be higher. Yet, I am very happy with the approach I take as it creates a better experience and helps foster a passionate community of people who want the game.

My biggest takeaway is just how important communities are for the first campaign, if Kickstarter doubles your backers and you bring in 11.5% through communities you’re already 23% of the way there!

I’m curious what stands out to you and if you have any questions I’m happy to answer them in the comments below.