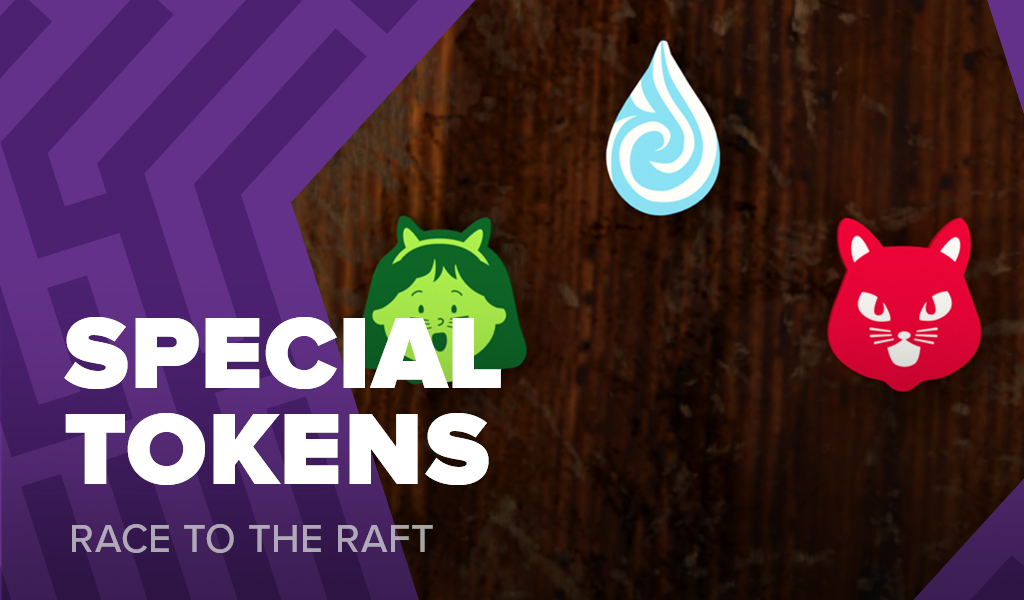 As you playthrough the Race to the Raft tutorial you will be introduced to a number of tokens and today I would like to discuss 3 of them.

Water tokens allow you to remove fire tiles from the board, you start with 3 of them and they are shared between the team. In between player actions you may opt to use a water token to remove any 1 fire tile of your choosing from the island.

At the end of the game you will lose points for every water token you have used, meaning if you want a perfect score you’ll have to not use them. This offers some great moments in the game as players will need to decide if they think the game is still winnable and it is worth taking another turn, or whether they should make it easier for themselves now, reducing the pressure of future turns but at the loss of points.

Typically speaking, the earlier in the game you use a water token the easier it will make it, but do you really want to sacrifice points prior to being desperate?

When a player has been nominated to perform an action, everyone at the table must remain quiet. This gives the active player full control to make a decision without feeling influenced by other players.

At the start of the game you will assign talk tokens to individual players and there will be a maximum of 2 in play. At any point during a players action someone may spend their talk token to start talking, until the end of the current turn they may now speak freely.

No player will have more than 1 talk token which can add a lot of pressure as to when to use it. This system works well in allowing people to help someone who is stuck, but it also keeps players alert when someone else is performing an action. You really need to watch what they are doing and if you think a mistake has been made, decide quickly as to when you should spend your token and join in on the action.

Meow tokens work in the exact same way as talk tokens but rather than being able to speak freely, they allow you to meow.

At first this may sound like a fun gimmick, but in practise it adds an interesting element to the game. For example, if someone is placing a card in a bad spot and you are desperate for them to play it elsewhere, can you communicate that with just 1 word? You’ll find the timing of when you meow and how you say the word will start to evolve as you become familiar with the game.

Perhaps the other player has misinterpreted what you meant and now you must rectify the situation by just repeating the word meow. Some of the most interesting moments of the game come from this action as you try to express a game winning strategy by saying just one word.

nextWhat to do if your Kickstarter is going to fail?