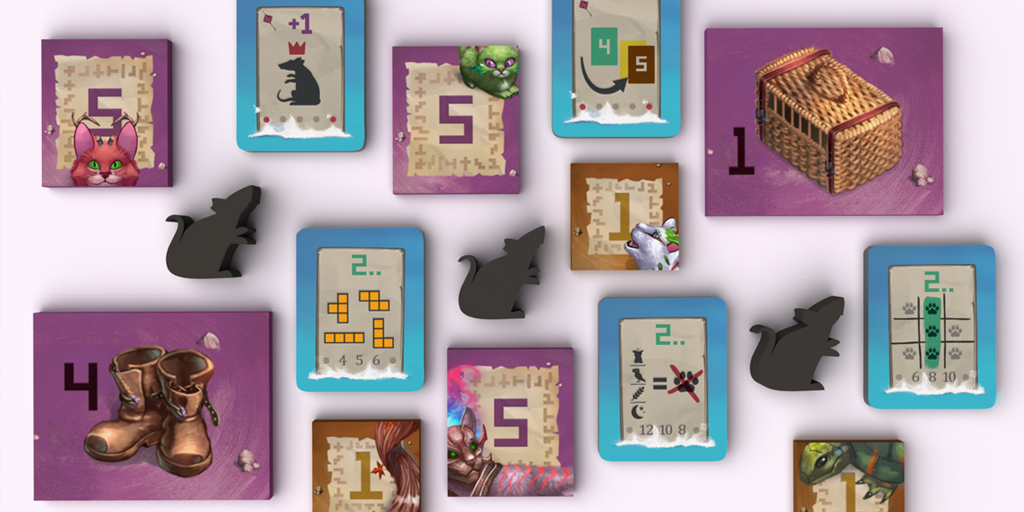 Today I will be diving into the events module, this one is a little bigger than the other modules, so I won’t be explaining every single detail but instead I will be giving a few examples.

This is the fourth designer post I have made, and you can find the previous entries here:

The Event module is a high complexity module and is for those of you who are already experienced with The Isle of Cats.

This module does not work with the family mode, but it fully supports the standard and solo modes, and for anyone who already has the Late Arrivals expansion, it will work with up to 6-players.

I should add, this module also adds considerable difficulty and replayability to the solo mode, and solo players will want to turn the game difficulty down the first time they play with events.

After I finished designing the kitten and beast modules, I wanted to explore a way to create something for the players who were already very familiar with The Isle of Cats. Rather than a small change, I wanted to make each playthrough of the game feel different, add challenging decisions to the game, and make it so what was true one play, would not be true the next.

When you play The Isle of Cats you will start with countless options and as you playthrough the game, you will start making decisions that reduce the number of good options available to you. The further you progress, the tighter your strategy becomes and the less you are willing to change.

A big part of this is because everything has a constant value, and that value is awarded at the end of the game in the form of points. I started to explore the idea of breaking this linear path and replacing it with a wave where time could impact the value of your decisions.

While adjusting the value of points over time was interesting, I felt this alone wasn’t enough to shake up the game experience as much as I wanted to. It may have an impact on what cards you choose, or where you place a tile, but the core decision you are making remains unchanged, should I take this card, and should I place this piece here.

This led me to the decision that as well as changing the value off things over time, I wanted to change the rules as well. These changes couldn’t be too large as to not break the core experience, but they did have to be impactful enough to make players consider doing things outside of their normal comfort zone.

The obvious way to achieve both of these things was through events, but events can be challenging.

Here are a whole bunch of things I had to consider.

There were countless other considerations, but I believe the end result provides more layers of strategy with little to no randomness and will make the game feel different each time you play.

There are 15 double sided event tiles and at the start of the game you will place 5 random tiles on the island board over the 5, 4, 3, 2, and 1 spaces.

Let’s look at a few examples.

You may have the following tiles:

You now have some interesting decisions to make, in round 1 are you going to take advantage of all those extra treasures, or are you going to avoid treasures entirely for the first round to score 5 points for having no treasures at the start of round 2?

In round 3 you’ll score 2 points for every lonely cat on your boat, so how will you place cats in rounds 1 and 2? You could get 8 cats by round 3 which would be 16 points, but will you be able to join them all into families before the end of the game? If you combo this tile with the kitten module, then you could get even more cats but how far could you push it and at what cost?

In round 4 you’ll get 5 points for leaving the captain’s rooms empty, but will you risk being able to fill them in the last 2 rounds?

In the final round you will play treasure and Oshax before your cats and typically players will use treasure in the last round to fill spaces. This time you don’t know what cats you’ll be getting so how will you adapt?

All of these things will start to add layers to the value of existing cards, is getting 12 points if there are no empty spaces around the edge of your boat going to be viable if you plan to leave the captain’s rooms empty until round 4? Perhaps the answer is yes, but in this setup you also have to consider in round 5 you will place cats after treasures, making it even harder to fill those edges perfectly.

The combinations possible can add much greater depth as I’ve tried to keep this example simple enough to follow while giving you a good idea of what you can expect from this module.

I will be revealing more events in the weeks to come but needless to say you will find they all impact scoring and rules in different ways, and those rat meeples?

Well, they are my favourite, so I’ll be talking about them in another post soon.

I am extremely happy with how the event module plays, revealing all 5 events at the start of the game means there are no surprises, everyone has the chance to work towards them and prepare strategies based on this playthroughs rule changes.

Having rule changes for the first and last rounds, while points for the middle 3 rounds gives each tile the opportunity to do something big. Yet, with the tiles being double sided and drawn from a bag, the setup for this module is still incredibly quick and easy.

The Event module will be available on Kickstarter on May 25th and you can follow along here.

previousLet’s dive into the Beast module!