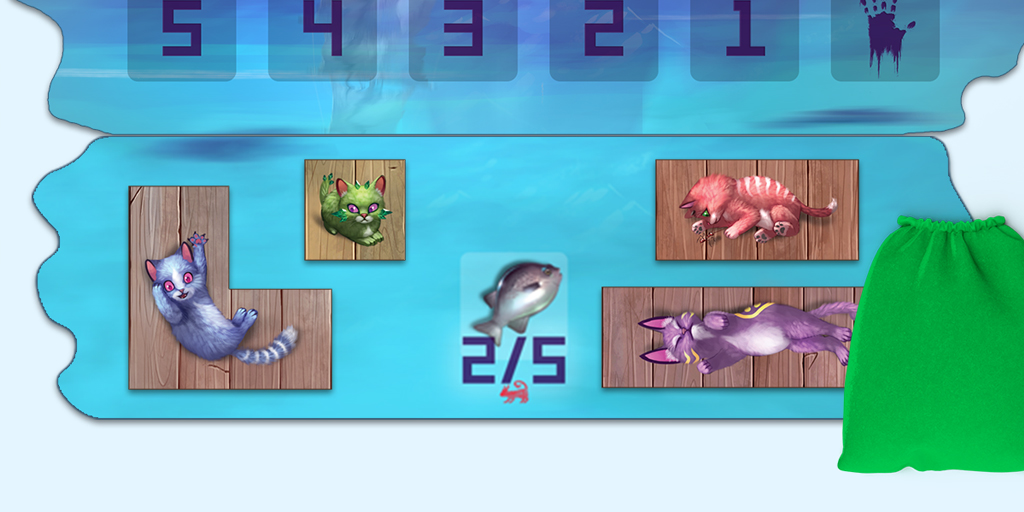 Designing the kitten module was an interesting challenge as it had an additional requirement that no other module would have.

If we take a step away from the rules of the game, there are many people who enjoy The Isle of Cats due to the theme and artwork, and kittens have been the most requested feature by far.

Ever since I designed the game, I knew they would be released via an expansion, but the challenge was to make sure they impacted the gameplay in a meaningful way, while also being accessible to everyone.

This led to module complexities, where each module is rated by the complexity it adds to player decisions and the kitten module had to have a low rating. This shouldn’t be confused with the impact it has on the gameplay itself, but simply how much additional time a player will need to spend processing their options and thinking about what they will do.

There were 2 obvious approaches to take with kittens:

Breeding, where having pairs of cats would generate kittens, and adding new cards that allow you to obtain kittens.

Breeding wasn’t right for me as I wanted to keep the feeling of rescuing cats, and also as you score points for having families, simply introducing a way for families to grow themselves wouldn’t necessarily add any interesting decisions to the game.

While experimenting with adding cards I came to a simple conclusion that The Isle of Cats doesn’t need more cards. The deck is already large enough and adding even more cards would decrease the likelihood of getting existing cards, make shuffling harder, and it doesn’t guarantee you would even seen a kitten card in the lower player counts.

Sure, you could update existing cards to add multiple options, but this means going through decks and switching cards in and out which goes against my third goal.

I decided that no new modules would add to the size of the deck, and all modules would be designed in a way that if you include them, you could interact with them, and it wouldn’t be dependant on a card draw.

With the obvious approaches written off, I started thinking about goal 4 and the areas of the game I’d like to enhance. I then weighed these up against what made thematic sense and started to explore the mechanism of speed. It makes sense the kittens may be more afraid of the humanoids visiting their island than the adult cats would, and that their parents may be more protective.

Players regularly argue about the value of speed in The Isle of Cats based on the different ways they like to play and how they like to approach the game. Speed was designed to add meaningful decisions to card selection, and a level of player interaction as you try to suss out whether you should play those boots this round or next. Many players however simply overlook it as they would rather get an extra basket or other card and take the risk they will get the cat they want.

Meaning speed never played the role I had hoped for, until now…

How the Kitten module works

Each day, the fastest player will now be able to rescue kittens as well as cats.

Kittens will need a basket and will require 2 fish to rescue them, however, you may rescue up to 2 kittens with a single basket if you are willing to spend an extra 3 fish (a total of 5) for the second kitten.

A separate kitten board is placed below the island, and 4 kittens will be available to rescue at a time. Unlike the cats, these kittens will not be discarded each round and new kittens will only be added when existing kittens have been rescued.

With this module in play, speed becomes much more valuable, and those 4 boot cards will suddenly feel like gold dust. You will find more value is given to saving baskets and boot cards for later rounds as you look to have everything in place by the time you win access to the kittens.

You will find increased player interaction as you try to work out who has how many boots, whether someone is saving boots, and the likely time they are going to play them.

With lower player counts, you will also benefit from knowing that there are only 20 kittens available, 4 of each colour. As they are not discarded each round, it is possible to cycle through these kittens and find the colour kitten that you need, giving you a new way to achieve lesson cards assuming you are the fastest player.

When it comes to scoring, each kitten is considered to be a cat and follows all the normal rules for families and lessons.

To conclude, while this module introduces minimal rules it will have you re-evaluating all your cards. It gives you access to ways to get specific colour cats (kittens) and drastically increases the importance of boots.

Finally, it also adds kittens which is perhaps all many of you needed to know!

The Kitten module will be available on Kickstarter on May 25th and you can follow along here.

previousMy goals for The Isle of Cats expansions

nextLet’s dive into the Beast module!