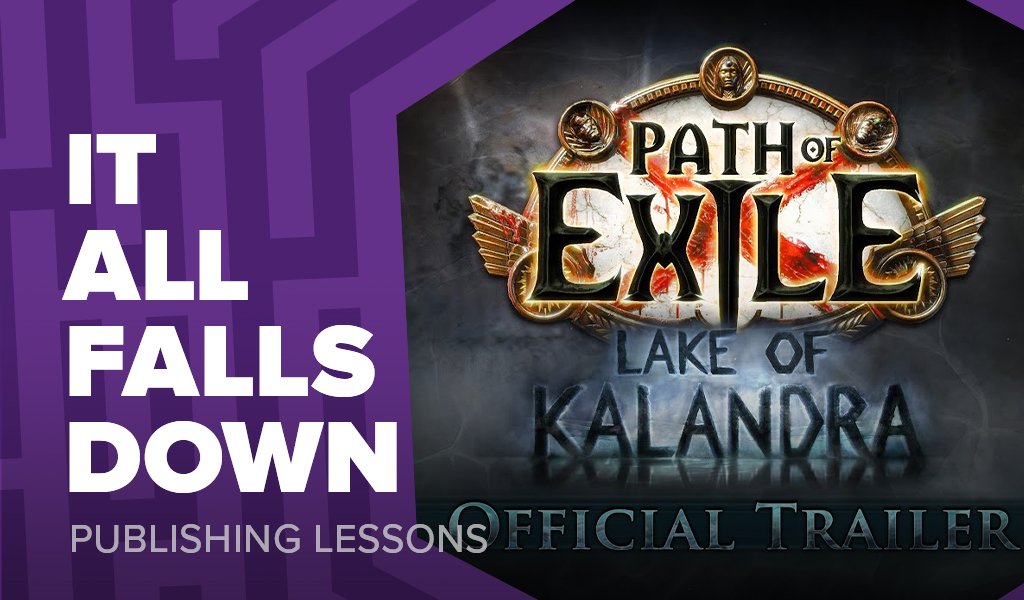 I have been a fan of the video game Path of Exile for many years, I’ve spent countless hours playing the game and even more watching it being played on Twitch. It was first released in 2013 and for many years Grinding Gear Games (the publisher) have released a regular update of content every 3 months.

This content update comes in the form of a new season, as Path of Exile is a season-based game where everything resets every 3 months. At the start of a season players will race into the new content to be the first to discover the best strategies, defeat new bosses, and achieve various personal goals.

These seasons are incredibly important to Grinding Gear Games as Path of Exile is free to play, and all new content is released for free. They make their money through in-game purchases, where players buy (primarily) optional cosmetics to make their characters look better. In many ways their income is based entirely on their reputation and the quality of the content they produce, as the more enjoyment someone gets out of a new season, the more likely they are to spend money.

This is a fascinating model where they only get paid if they do well.

I have always had a lot of respect for Grinding Gear Games as they are very active within their communities. Their lead designer and co-founder Chris Wilson regularly posts on Reddit, takes part in podcasts, and announces each new season via a live stream on Twitch followed by open questions with the community.

They have learned over the years the value of being transparent and not hiding things from their community.

Last week, a new season (3.19 Lake of Kalandra) launched and it has unfortunately led to many problems for the game. It has had the lowest player retention of any new season, with around 50% of players quitting the season within the first week. For reference, a good season would be closer to 25%.

As a company that is dependant on players enjoying the game to make money, this could be considered a disaster, but why did it happen?

Chris has always been very open with his goals for the game and is not afraid to make changes to achieve his vision.

The public perception of this appears to be that Chris has become unhappy with some parts of the game, while most of the players like how it is.

This creates a conflict as whenever a change is made that players do not like, they make statements like “they are changing the game to reach Chris’s vision, and not to make it more fun.”.

Players are starting to feel ignored and the gap between the community and the design team is widening.

When a new season releases there are patch notes containing all the changes released to the public. Path of Exile is a game where many players will spend countless hours in third party spreadsheet like tools doing the maths and working out the best options. Some players (like myself) enjoy working out the numbers as much as they enjoy playing the game and Grinding Gear Games knows this.

This makes the patch notes vital and Grinding Gear Games have said many times they spend considerable time writing them to make sure they are as detailed as possible.

With the latest season a key piece of information was missed from the patch notes which contained what many consider the most impactful change to the game for a long time. Not only that, but this change was seen as an extremely negative change that moved the game away from where people wanted it, and much closer to the games vision.

Despite the great reputation Grinding Gear Games has, many have asked whether this was deliberately left out of the patch notes, or whether it was a mistake.

Are they trying to hide moves towards the vision of Chris as they know players wont like it?

Whatever your thoughts on this specific situation, the bigger picture is far more concerning. The trust is being lost and conflict is becoming more frequent.

Having watched this unfold over the past few days it’s left me with a number of thoughts:

1) What do you do when your vision for a game starts to move away from what people are finding fun in your game? Should you stick out your vision despite the cost, should you submit to the players, or can you find a middle ground that everyone will be happy with.

2) If you build your company on transparency and hide something from your community (deliberately or accidently), how long do you have to fix the problem? It took just a couple of days for players to start dropping out from Path of Exile, including many big community figures who make their living playing the game.

3) Should your vision for a game be public? Should a game simply be the game it currently is, or should you make it public how you want the game to be.

I have full confidence in Grinding Gear Games being able to recover from this, but it will take a while, and I’m learning a lot by watching how they respond to the situation.