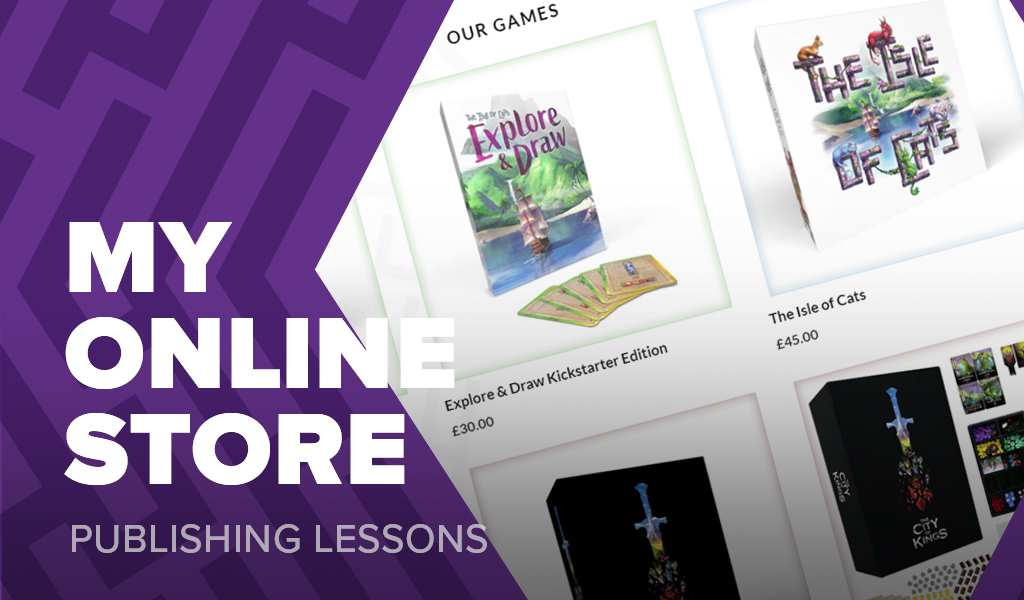 In 2018 I was preparing to fulfil my first Kickstarter and was starting to get requests for how people could buy my games. I had some very basic distribution in place but it wasn’t global and I wanted to make sure everyone had an option.

I decided to launch an online store and let people buy direct.

I would ship from a local warehouse where I could, but as stock ran out, I would fall back to shipping from my UK warehouse. The shipping cost would be high, but I decided to absorb as much of this as possible as the goal was to make sure people could get my games – profit was a bonus.

In fact, even today I don’t make profit on 10% of the orders from my store as I subsidise shipping considerably around the world. I find the reward of knowing everyone can get the game, no matter where they live, and that I’m still making something from 90% of people to be enough for it to be worth it.

I use Shopify, it’s incredibly simple to setup and has all the features you need for an online store. I pay annually and use the lowest tier of $14.50/month. I consider this very cheap as I receive daily orders and have done for a number of years now.

I don’t use any of the fancy features, I have a very basic (free) template, and it does the job perfectly. It took about 4 hours to setup, not including the time it took to put together the product images.

I’m sure if I spent some time further customising the store, I could increase conversions and get far more out of it, but that’s not something I am interested in right now.

After that comes most of the EU countries sitting at 1% or 2% each.

To date, I have not advertised or promoted my store in anyway other than links from my own platforms. There is likely a considerable amount of additional revenue I could generate if I chose to advertise, but I prefer taking an organic approach.

My top referring websites are:

Kickstarter is high as I point the call-to-action button at the top of a completed page to my store and label it “buy now”. I highly recommend doing this for all your completed campaigns as it’s clicked frequently.

The top selling items on my store are (in order):

From more recent months, the Bag’o’Fish (upgraded wooden tokens) and the various promo packs have also been very popular.

In some ways “top selling” isn’t overly helpful as it evolves over time, but it’s been very consistent that Kickstarter items, Deluxe versions of games, and upgrade packs have been the most popular by far. I see a lot of people purchasing my games in retail and then heading to my store for upgrades.

I typically see a huge jump in sales in the weeks following fulfilment of a campaign, it lasts for 1 – 2 months as it slowly trickles back down to normal.

I would recommend making sure your store is setup prior to fulfilment starting, as leaving it until afterwards risks losing a lot of sales.

I always list new items as pre-order and state a date they will start shipping, which allows people to order them during my fulfilment periods and then receive them afterwards.

I would note that after my first Kickstarter fulfilled, the traffic to my store lasted around 6 weeks before it practically dropped to nothing. It took a good year and 2 fulfillments before it started generating regular income, but as with everything, you need to start now if you want to succeed in the future.