One of the lesser-known parts of running a Kickstarter is just how many people cancel their pledges or decrease from one reward tier to another during the campaign. When you login to see how things are doing, it’s not uncommon to see the dreaded red labels. 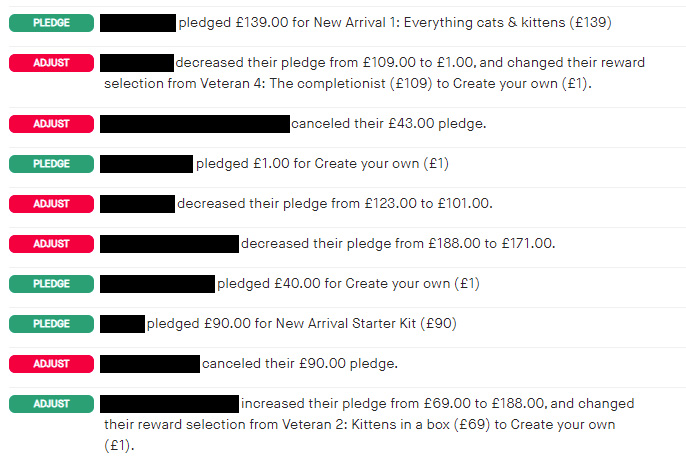 This is perfectly normal and if you’re a first-time creator I want to strongly encourage you to avoid looking at it. You’re going to have people change their mind and you should stop looking at cancellations as they will only negatively impact your mental health.

How many will cancel?

The Isle of Cats: Don’t forget the Kittens! finished with 12,133 backers, yet there were 13,070 backers overall. By the time the project ended, 7% of people had cancelled at some point!

I’ve seen the cancellation numbers vary a great deal from project to project, 5 – 10% is not uncommon.

It’s not just cancellations, you’ll also have a number of adjustments each day as people change their mind on what they want. I took a look at June 17th (one week before the end of my campaign) to see the numbers:

The only time you should be concerned about cancellations or adjustments, is if your funding stops increasing, starts decreasing, or you see a lot of concerned comments followed by cancellations in your comments area.

Unless there has been an issue, and typically these will become very visible very quickly, just carry on as normal and celebrate the backers who are joining!!

previousCreating a demo for your game