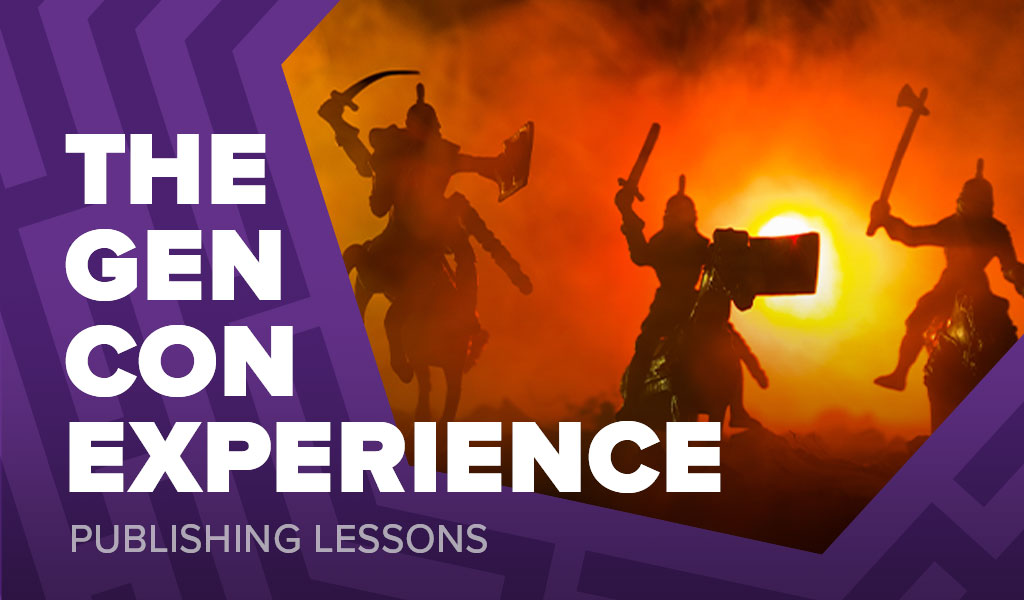 Earlier this month I was at Gen Con, one of the biggest board gaming events of the year. It’s always an incredible experience, but for me it’s a non-stop working show with no breaks for days on end.

This is by choice, and I love it!

I could take volunteers or have someone else run my booth entirely but that isn’t what I want to be doing. My goal is to interact with as many people as possible, that includes industry people, community members, and new people. Everyone is treated equally and that’s partly why I don’t book meetings during the show opening hours.

Let’s take a look at how the week went.

The journey begins at 00:30 on the Sunday morning where Sara (my girlfriend) and I had to get up, get into a taxi, and start the journey to the airport. This is always a bit stressful as we had 6 bags with us, including an oversized bag, and getting them into even a large taxi was challenging.

It was meant to take 23 hours with us arriving at the hotel at 23:30 but a delay on the last flight extended the trip by another 3 hours. We arrived at the hotel, showered, and got into bed by 03:00 after 26.5 of travelling.

We always arrive 1 day early as we want to get some rest between the journey and the intense experience that we’re about to encounter. I’ve learned over the years that 1 extra day can make all the difference and is more valuable to our performance on the show floor than any other factor.

I’ve got 2 days of emails to catch up on, a blog post to write, and a newsletter to produce before I can move on to other things. I spend 4 hours getting everything done and then head to a shop with Sara. We’ve got to stack up on water and snacks for the booth before we start setting up tomorrow.

The afternoon gives us a couple of hours to rest as our first dinner of Gen Con is at 18:00 and we’re meeting someone.

There was only one night of the show where we didn’t have dinner plans, as dinner is a great way to have more important meetings.

We get back to the hotel around 23:00, bump into a few people who are checking in and catch up with some old friends before heading up to bed just after 00:00.

It’s an 8am start as I have another blog post to write and some work to do before we start setting up.

The first stressful issue of the show also pops up as we get told there have been problems getting our stock into the convention centre. At this point we may not have any games to demo (let alone sell) and we’re waiting for an update that doesn’t come for 6 more hours.

We head to the convention centre, grab our badges, and start setting up. The hall is incredibly hot as they don’t put on the air conditioning during setup, and I struggle with the humidity. We spend all day (until 20:00) setting up and luckily receive our games by 17:00.

Unfortunately, the heat has caused an old knee injury to swell up and I have to limp back to the hotel with Sara keeping me vertical. I’m not too worried but we decide to rest for a couple of hours before heading down to the hotel bar and socialising from 22:00.

A big part of being at conventions is who you bump into, and being in the hotel bars is a great way to meet people. It’s certainly a pleasurable less work like activity, but after a 14-hour day including 6 hours of heavy lifting and injuries, it also takes its toll.

Another 8am start as we head back to the convention centre to continue setup. The second day is always busier as there are a lot more people turning up which means unplanned meetings. I ended up having 6 meetings on the Wednesday during setup and countless smaller chats.

Wednesday night is a big business dinner, so we needed to make sure we were wrapped up (and clean!) in time.

The first 3 days of the show follow the same routine:

It’s rare to be back in the hotel room before midnight, at which point I spend an hour or two catching up on emails before heading to bed.

I aim to get 5 hours sleep each night and get as much done as possible while not missing that goal.

For the most part Sunday is the same as the other days except the hall closed at 16:00 instead of 18:00.

Once the hall is shut it’s time to take down the booth and finally Sara and I can take our time.

We always make sure to fly back on the following day, meaning we don’t need to rush the takedown because by this point, we’re pretty exhausted.

We can’t wait too long though as we still have dinner plans and people to meet in the evening!

Come Monday our journey home begins, with our flight being moved around it’s going to take 29 hours to get back and we’re ready for a sleep.

By the time we arrive home on the Tuesday afternoon it’s been 9 days since we left and I’ve had under 50 hours sleep in that time, it takes 2 days to fully recover.

There’s a reason people take volunteers and I never recommend anyone attempts Gen Con in the way I do. It’s a brutal experience, but somehow, I make it work and have a lot of fun while doing so.

I know I won’t always be able to do this, for one thing as I get older I will find a time where I don’t have the energy, but I really do enjoy it and hope I don’t have to stop for a while yet!

next2 simple tips for saving money