A ferocious fighter armed with his family warhammer, the diminutive Thralir Hilfeet must fight with his eyes shut during the day; but that doesn’t seem to stop him being just as deadly! The dwarven King had never seen the sun before Vesh’s invasion of Flintrock, spending his entire life underground as one of the brave Deep Delvers, but after seeing 280 of his kin die when Vesh broke the walls of his home he fought his way clear and leads what is left of his shattered people. 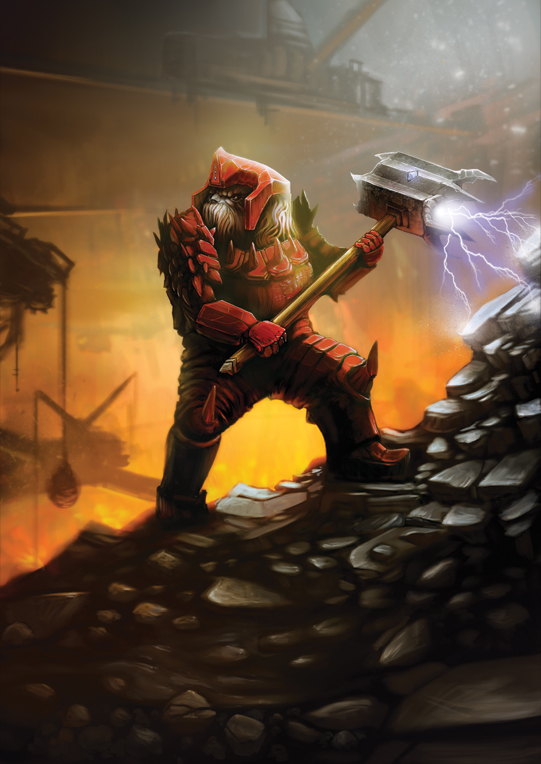 Remove up to 2 fire tokens from tiles within range.

When your hero is on a mine tile your basic attack does +3.

Place a -1 heal token on 1 creature in range.

Draw 1 item card and add it to the Trade District.

Place 1 weak fire token on a tile in range.

Restore 3 health to all heroes in range (including yourself).

Anytime: After a basic attack damages you, you may attack 1 creature in range.

Instantly spend 5 stats on your workers. You may increase any worker stats in any combination.

Your basic attack does 50% extra damage to creatures on a tile with a fire token.

When you are in range of 2 or more creatures, incoming basic attacks are reduced by 5.

Thralir is a master of fire, workers and trading, but he’s also a powerful group healer and terrifying when he goes berserk!

Would you prefer to fight in the pits using range and positioning to your advantage or place a stony curse on your enemies?

Will you fill the Trade District with endless options or keep your entire team alive?

Which of Thralir’s skills will you choose?