Calamis was brought to life when a drop of blood from the last of the Fallen hit the ground, and it was there to hear the Fallen’s dying words (although it has never told anyone what they were). Calamis Earthshaker cares about one thing only; the sanctity of the City of Kings – but has broken millennia of tradition as it marches out from its home to do battle against Vesh. If anything stirs in its crystalline heart then it might be regret that Calamis’s own essence was stolen by Vesh Darkhand to power the sorcerer’s foul experiments. 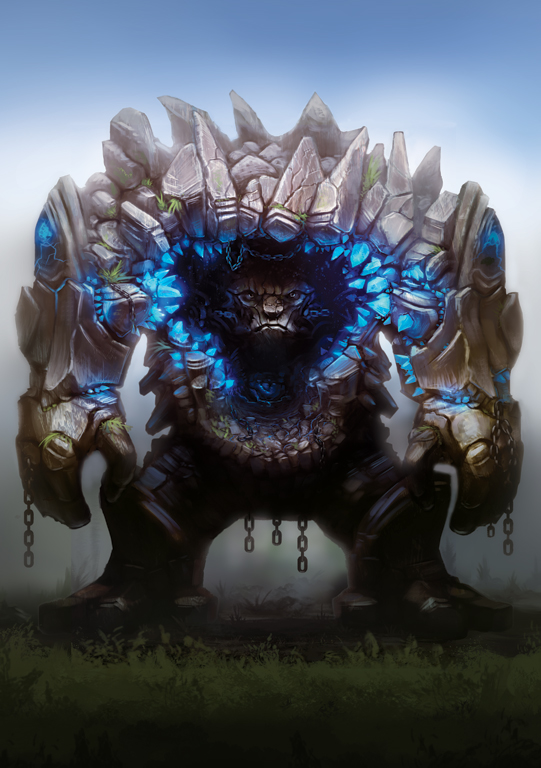 Remove up to 2 frost tokens from tiles within range.

A special attack that hits your target and all creatures adjacent to your target.

Remove all poison tokens from 1 hero in range (including yourself).

Place a -1 attack token on a creature in range.

Trade 2 resources for any other 1 resource.

Heal a hero in range (including yourself) for 2.

Creatures on your current location (tile) cannot move. This overrides any movement abilities the creature has.

At the start of your turn if you are not in range of any creatures you may heal a hero in range (including yourself) for 5.

Transform: You can no longer move. Whilst transformed reduce incoming damage by 5.

Earthshaker’s skills offer a lot of tough choices, do you want an extra attack or extra heal?

Would you prefer to panic a creature and force it to move to another tile, or would you rather be able to pin it to its current location with Earth Prison?

Are you going to play safe and have the ability to cure poison? Or do you want to be able to slowly weaken creatures with Instil Fear?

Which of Earthshaker’s skills will you choose?