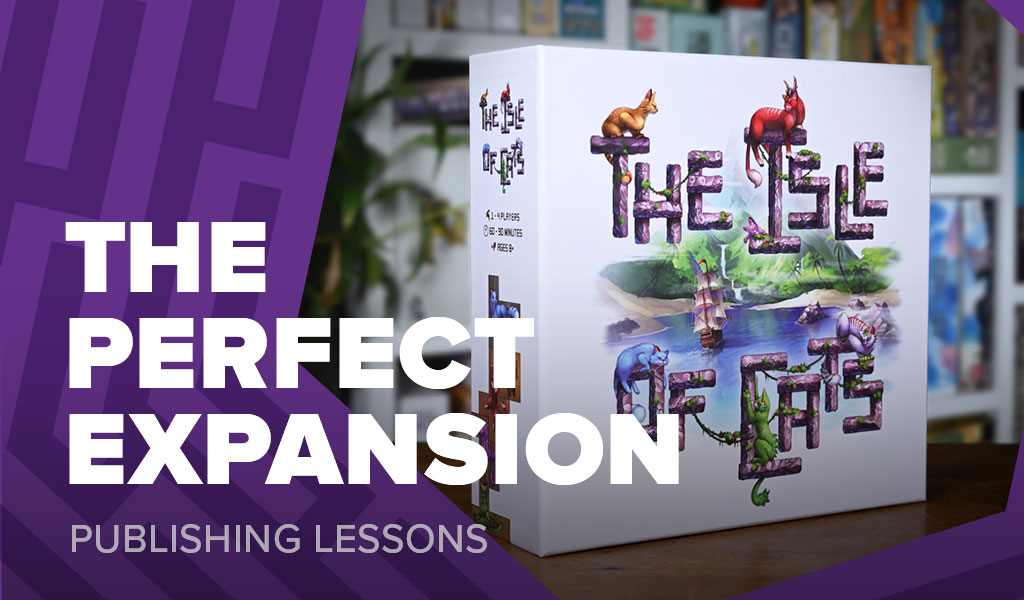 I recently released the design diary delow discussing the new expansions for The Isle of Cats. While it is design focussed article, I think the thought process about when to release the expansions and how they should be presented are still a good lesson for publishers and wanted to share it here on my blog.

The Isle of Cats was first released via Kickstarter in June 2019 and was a huge success, gaining over 8,000 backers. Thousands of extra copies of the game were ordered in the months that followed, and I started wondering what the future held for The Isle of Cats…

As a designer, I think it can be easy to design an expansion as you already have all the pieces — and with a successful game, an expansion is as guaranteed as anything can be to see some sales. The obvious path was to start work on a new expansion and get it ready to crowdfund alongside the March 2020 retail release of The Isle of Cats. After all, this is when the game would have the most hype and the biggest chance of success.

I then asked myself a simple question: How do you make the perfect expansion? Certainly not by making an expansion for a game that hasn’t been released yet, so I put everything on hold.

My new plan was simple: Wait for the game to release, then monitor everything, read every review, watch every video, and see what people were saying. Rather than design an expansion from scratch, I planned to design an expansion with a list of problems ready to solve. 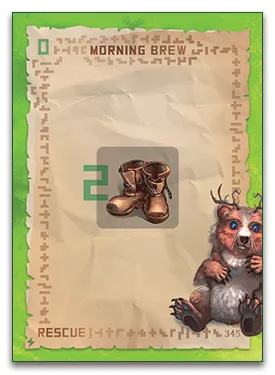 A great example of this is the boots resource in The Isle of Cats, which is used to determine turn order. The intention of this resource was to encourage players to pick moments at which they wanted to be the first player, to build up speed and find the correct moment to strike.

However, while many people did play this way, there was a group that viewed boots as a secondary resource and prioritized taking fish and baskets, leaving boots as a happy extra if they received them.

This isn’t a game-breaking problem, but perhaps an expansion could adjust boots just enough to raise their value in the eyes of more players.

The Isle of Cats is all about looking at the options given and finding the best solution, then adapting that solution as your options change. Most players naturally play this way, and rather than hope a specific tile will come into play, they plan for a variety of options. However, some players can get fixated on a single solution and will then get frustrated with the game if the right tile doesn’t get drawn from the bag, especially in lower player counts.

Again, this isn’t a game-breaking problem, but it does reduce the enjoyment for a group of players and could perhaps be tackled in an expansion?

My list continued to grow and in addition to the above points, I added:

Ideas started to flow, and I was feeling confident that designing a perfect expansion was becoming a possibility — until one last thing struck me. Everything on my list was about “fixing” and “improving” the game, trying to solve the issues I was seeing by creating an enhancement expansion. Yet by this point the game had already sold over 100,000 copies, was quickly approaching the BoardGameGeek top 100, and was being loved by many people.

Was this expansion going to change things too much and cause everything to tumble down?

I started thinking about a second type of expansion. Rather than add to the game and introduce new systems that changed the experience, I changed my approach to adding replayability without modifying the experience.

This proved relatively easy as I always wanted to experiment with new boat (that is, player board) designs, and they would be a great way to keep the gameplay the same, while changing the puzzle depending on your board.

The Boat Pack expansion was born, and I was having a lot of fun. The game was the same, yet everything was different. Tiles worked better in different places, the point-scoring lesson cards had different values based on your specific boat board, and it felt brand new.

As I wrapped up the Boat Pack expansion, I thought back to my lists — all those notes that I had made and forgotten about while designing an expansion that I could have made on day one after all.

The answer to my original question became obvious: You can’t make a perfect expansion.

Once a game has a large enough audience, people will enjoy it for different reasons. It will never be possible to design an expansion that will please everyone as some will want change and others won’t.

What if I made two expansions? The first for people who just want more of the same experience, and the second for people who wanted something new? Then, what if I broke down the something new into modules that could be plugged in and played (without complex set-up) and allowed people to experiment with the combinations that were right for their groups? 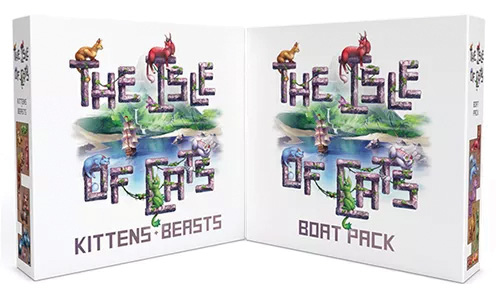 Rather than forcing everyone to use everything, these two expansions and the sub-modules would give people the freedom to mould The Isle of Cats into the game they wanted.

With the Boat Pack ready and my lists in hand, the Kittens + Beasts expansion came to life with three new modules:

The kittens module filled the role of a simple module. I knew thematically people would be most excited about this, so I wanted to keep it accessible. It introduces new tiles that are persistent through rounds, giving you more deterministic access to a small set of tiles and the ability to cycle through them to the colors you need. However, these are accessible only to the fastest of players, adding extra value to the boots resource.

This module solved two of the key gameplay issues I wanted to tackle and added the missing thematic piece (kittens). It was perfect as it required only a few cardboard tokens that didn’t get mixed in with anything else, and you can decide to play with or without them, without having to separate pieces from the core game.

The beast module introduces early game direction by giving you access to a guaranteed high-scoring piece in the first round, which had an inbuilt objective for you to work towards. By the time the objective is completed, you’ll be far enough into the game that other paths will have opened and given you a clear path to playthrough. 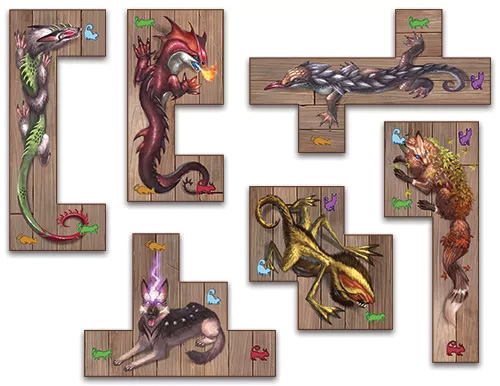 Similar to the kittens module, it’s made up of just a few tiles in their own bag that don’t get mixed with other components, making it easy to plug and play. From a thematic perspective, it also solved another problem by introducing a range of new creatures for those who are less fond of cats.

The final module was the trickiest by far. On one hand, I wanted to add to the complexity of the game and make decisions harder. On the other hand, I didn’t want to introduce lots of new rules and drastically change the experience of the game. I played around with a lot of ideas and eventually landed with events, which introduce ways of scoring during the game. 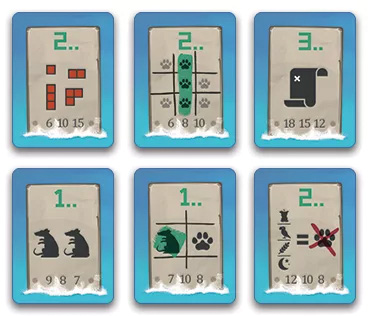 Until now, everything scored at the end, and that means completing the game with objectives fulfilled, so I explored the idea of having objectives for each round, allowing you to achieve them, score them, then break them. As an example, perhaps one part of your player board must be empty at the start of round three in order to get 5 points, but then from round three onwards you could start to fill it.

If each of these new objectives could encourage you to do things that you wouldn’t normally do, you’re now pressing your luck on how many points you want to earn at the cost of making your last few rounds more challenging.

There are, of course, other things that feature in these two expansions, but this article was written to talk about designing expansions, to challenge people to not just design expansions based on what cool ideas they have, but to see how the wider audience interacts with their games and let that feedback into the process. As with all designers, I have my playtesting groups and connections, but nothing compares to the thousands of players who’ll play your game upon release.

I couldn’t be happier with how these two expansions have turned out. They enhance the game, and they give players the choice to enjoy the game in the way they want.

I look forward to seeing how they are received in the months to come and whether I add any new thoughts to my lists.

previousThe golden era of crowdfunding is over