Designing a great game is not an easy challenge but taking a great game and making it a success is even harder. Unless you already have a large enough following it doesn’t matter how good or how pretty a game is, you still need to find a way to let people know about it.

In 2018 I was working on The Isle of Cats and I asked myself:

What do I need to do to sell one hundred thousand copies of this game?

This wasn’t my first game and I was lucky enough to have previously run a couple of Kickstarters which had a few thousand backers, but one hundred thousand is a whole other level…

I straight away realised that this wasn’t something that was going to be achieved on Kickstarter. Of course, I would do what I could to make the Kickstarter as big and successful as possible, but this was bigger than Kickstarter.

I needed to find a way to use the fulfilment of the Kickstarter to launch the game to the masses. My own reach may have been a few thousand, but those few thousand people likely had a reach of tens of thousands of gamers.

The plan was to arm my backers just before the retail release and hope they would choose to pull the trigger. I say hope because I never planned to ask anyone to do anything, if this was going to work, it would need to be an organic event.

I came up with the idea of printing something inside the box lid, a special instruction for cat owners that read:

“Cat setup. If you have a pet cat, you should place it here while playing The Isle of Cats.” 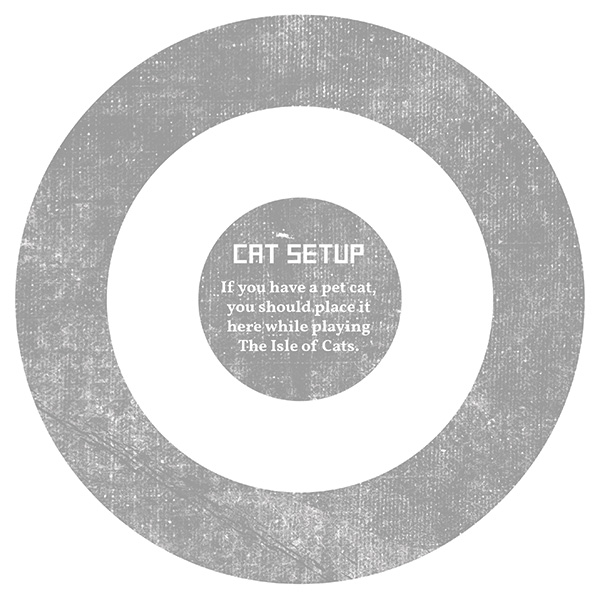 The concept was fairly straight forward, this was a game about cats and a lot of people (especially cat owners) are familiar with how frequently cats will sit in boxes. However, there was a lot more to it than that and to help you come up with your own million dollar ideas, I’m going to dive into the details.

The following is a breakdown of my thought process that led to me moving forward with this idea over others.

When someone opens a game it should be a special moment, there’s an excitement to looking through the pieces, browsing the art, and seeing what’s in the box. You may find a special piece that is super cool and brings a moment of joy to your game.

The box lid idea took this to another level, in many cases the new owner immediately realised that the person who created this was a cat person. Just like them, it introduced confidence the person who made the game knew cats. It provided a connection between the owner and the creator that made the experience more personal.

Often special elements of a game are the primary component and are featured in all marketing, highlighted on the box, and impossible to miss. While this idea wasn’t a component, that meant it could be a secret and left for people to discover for themselves.

I was never going to tell anyone about this, and this is how it became my much needed ammo for when backers got the game in their hands. There would be an explosion of people discovering this for the very first time.

This was an idea that would never get old even if you were the 10,000th person to discover it, it would still be a special discovery for you.

This idea was incredibly sharable due to a combination of elements:

By keeping the idea a secret, this idea ticked all 3 of these boxes and made it organically sharable. So much so, that I was confident I didn’t need to mention that people could take photos and share them online.

To me, being asked to take photos and share them breaks the organic experience I’m having and makes it feel like I’m being marketed to. By not mentioning this, the idea is left to the owner of the game and with that comes much more positivity in the overall message being shared.

The core idea may sound like it is aimed at cat lovers, but I was very aware many other people would also be buying the game. By creating a cat focussed message, it could create a friendly competition with people who had other pets wanting to get in on the action.

If a photo of a cat in the box lid was going to be popular, it was possible a photo of a dog in the lid would be even more popular.

The Isle of Cats was well received, the game had fantastic reviews and on release people were talking about it.

The question is, was this a million dollar idea, or would the game have sold as well without it?

It’s impossible to say, but what I do know is this:

I don’t know how many people become aware of the game because of this, but I do know over the past 2 years there have been over 1,000,000 views (and likely many more) of images and videos of pets in the box lid. Even today there are regular photos from new people discovering the game and I’ve more than doubled my original goal of selling 100,000 copies.

Regardless of whether or not the idea itself directly led to a million dollars worth of sales, it certainly helped and provided owners of The Isle of Cats with a special moment.