Today I would like to take you on a journey, and while it is only a minor event when compared to the last two years, I’ll tell you my story of how a quick reaction to a potentially disastrous event resulted in an unplanned game that changed my life.

It is February 2020, and my brand-new game The Isle of Cats has just finished shipping, thousands of people around the world are starting to receive their copies, and I am planning the big retail release. As a self-publisher who designs and releases one game every 12-18 months, this was my moment to shine.

The Kickstarter campaign had exceeded my expectations, but the retail release planned for March 19, 2020 was where the game would either take flight or disappear into history. I booked as many events and activities as possible to promote the game, then flew to the GAMA Trade Show in the U.S. on March 7th.

It was at this time that the world started to fall apart. The pandemic was spreading, and travel was locking down. A lot of people cancelled going to the trade show, including my distributor, and one by one my meetings got cancelled. My heart sank. Over two years of planning, a small fortune invested, and suddenly we couldn’t go outside and play with our friends anymore.

As I started the 24-hour trip home, I was worried. I didn’t know what to do. Who was going to play The Isle of Cats if you couldn’t get to a store or play with a friend?

Was the game just going to disappear?

As a designer, this idea fascinated me. The game was already finished and packaged in a box, so I couldn’t change anything. How could I rewrite the rules to allow for remote play while not negatively impacting the experience? 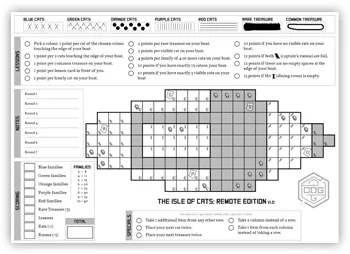 I started by examining the core experience of the game and breaking it down into three parts:

In The Isle of Cats, the card draft forces you to choose between different types of cards. Do you want resources, points, or tiles? The draft itself helps change the options each round and leaves you with both things you want and don’t want.

The challenge here was obvious. You can’t pass cards to each other when not in the same room, and having everyone match up the order of a deck of 150 cards wouldn’t be fun for anyone.

I experimented with the idea of taking a subset of the cards and randomly distributing them into a grid alongside cat tiles. Cards would go in some spaces, and tiles would go in the other spaces. 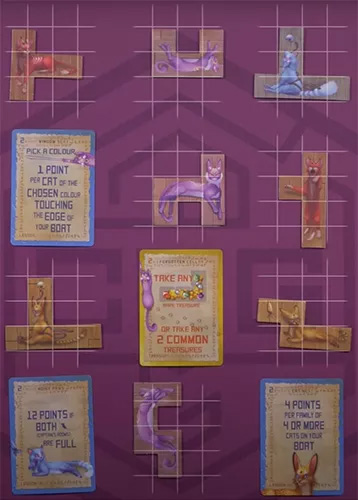 This created four rows of three options, with each row having a mixture of both high and low cost options in it. You were getting fewer things per round than in the original game — something I fixed by increasing the number of rounds — but you could easily share these options via a photo or video.

This set-up is not an identical experience to drafting, but it offers comparable decisions and can be played remotely!

Resources limit the number of things you can do each round by restricting how many cards and tiles you can take. You can choose a few expensive things, choose a lot of cheap things, or find a balance.

While resource management is a big part of The Isle of Cats, it didn’t seem fun to make people keep running totals via pen and paper of what they gain and spend. The new grid-selection system already removed the ability to take all high-cost options due to the pattern used, so I made the decision to remove resources from the remote edition.

This is where everything comes together as you find a way to place the tiles you have selected in the most optimal way to score points.

Luckily, this experience was very easy to replicate through remote play. Rather than players having a board and placing tiles on it, they would simply have a sheet of paper on which to record their decisions and draw tiles. 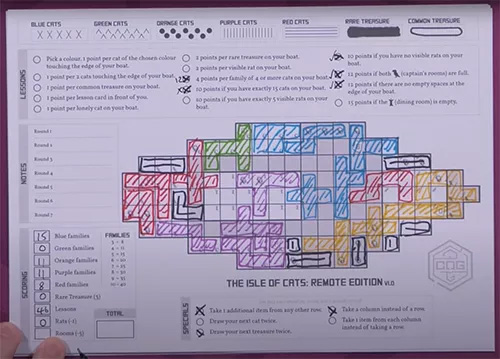 Drawing tiles is never as easy as physically placing them, but this was a far more practical solution than having everyone search the box for the same pieces every round.

Quick on their feet

It took just three weeks to get the remote edition of The Isle of Cats into a playable state, and the one advantage I had was there were loads of people willing to playtest remotely via Zoom, Skype, Discord, and livestreams! I organized the first large public playtest for April 8, 2020 and was blown away by how many people turned up.

Throughout the next weeks, I refined the remote edition, making slight changes here and there while doing regular streams. Then, to my surprise other people started streaming the remote edition, and before I knew it, thousands of people were visiting my website to download the player sheets.

While this could have been a time to sit back, worry, and see what happens, it had become a time of celebration. A community was born, and if you wanted to experience The Isle of Cats, it was a great way to get a taster.

Of course, it wasn’t the exact same experience, but if you liked one, you would most likely enjoy the other, and it kept people from leaving an unopened box on their shelves. I largely hold the success of The Isle of Cats to the remote edition and will continue to explore remote modes for future games.

Despite the success of the remote edition and how much people enjoyed it, one thing continued to bug me: This was a mode designed for what was already in the box.

To play it, you would need to go through your game and take out certain cards. The lesson cards, i.e., the point-scoring cards, were also balanced around the normal game, and this meant that only some worked with the remote edition. In the end, the mode had limited replayability due to you always seeing the same cards, and it wasn’t perfect.

As time went on, I thought about this more and more until one day I asked: How would this work if I designed it from scratch? If I removed those limitations and could add new pieces, would the game be better? 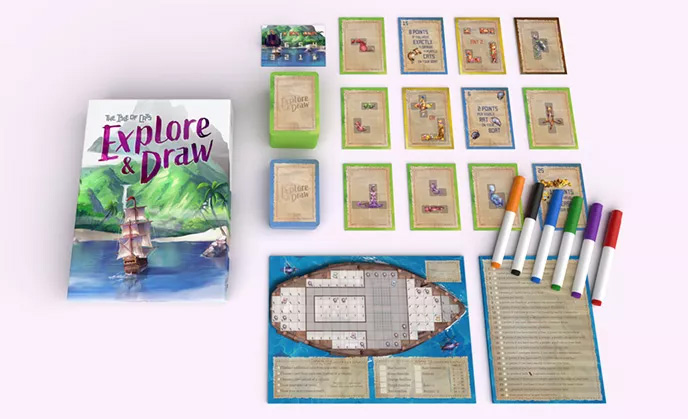 I spent the next six months tinkering with slight adjustments, such as changing the cat tiles to cards so that they could be mixed with other options and creating a better (larger) set of lesson cards to offer more replayability.

I turned the print-friendly black-and-white player sheet into a full-color piece and removed the need to mark colored cats with patterns by having you use colored pens.

These adjustments took what was already a good game and turned it into the perfect game for the experience it was providing. After all, at this point thousands of people had playtested it, which is a luxury most designers never have.

In June 2021, just over a year after the remote edition first released, I launched a Kickstarter campaign that included The Isle of Cats: Explore & Draw and was blown away by the response. It turns out it really helps people make a decision about a game if they have already played it in full beforehand!

Inspiration can come from anywhere, and you never know when your next big idea will appear. Perhaps you’ve been trying to solve a problem for ages, or maybe you woke up and the world was a different place.

In March 2020, I chose to respond to a personal disaster by creating something new. I let the changes around me lead to innovation. The next time you’re faced with a tough situation, I encourage you to take a minute to breathe, then work on a solution.

Perhaps, like me, you’ll find a new way of doing things and create something great. 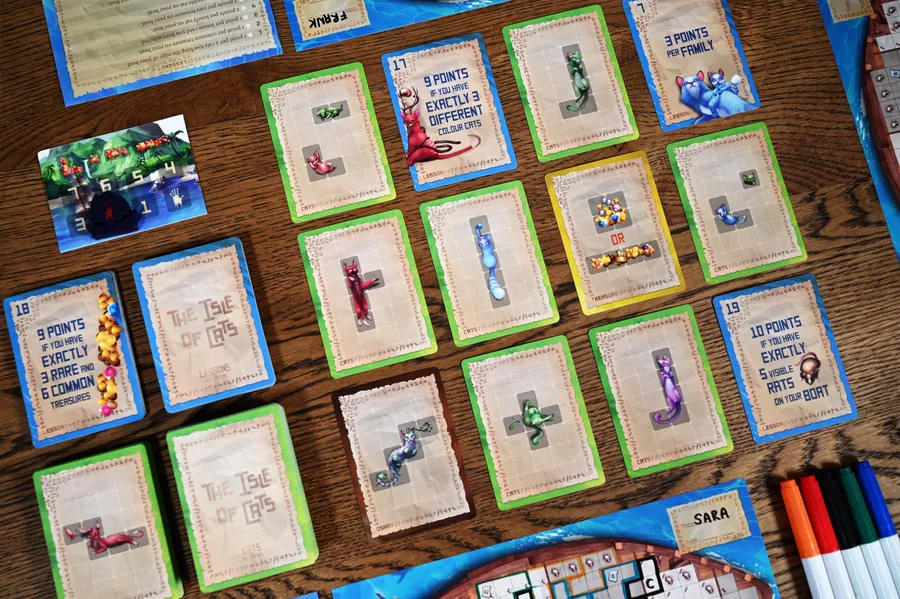 previousHow many followers do you need to fund a Kickstarter?

next10 red flags for Kickstarters